You know the expression of the only certainties in life being death and taxes? Well, if you live out in the country you add in another certainty to that list…laying gravel on your driveway.

It seems that every couple of years, or every year in some cases, all that gravel just magically disappears and you have to lay down another layer. Where does it all go anyway?

One thing about it, the kids love to see the big truck raise his bed and unload it as he drives down the drive. Of course, you have to also have him drop some in a pile so that they can play on it.

As much as we dislike the added expense of having to do this, it sure beats the alternative. A few years back we had such a bad winter that we actually got stuck in our own drive! We had 8 inches of rain over a two-day period and the ground just couldn’t take it. As we tried to get out and go to town, the muddy ground took our minivan down to the axle.

What’s funny about this is the fact that when we were forced to call out a wrecker to pull us up and out, the wrecker also got stuck and buried as well! A second bigger truck had to come out to pull out both the wrecker and our van.

Not surprisingly, the second bigger wrecker nearly got stuck as well. When I asked what plan C was in the event he did get it stuck, they told me they would have to call in for a bulldozer to clear everyone out. Now that would have been a site for sure. Thankfully, there was no need for a plan C. 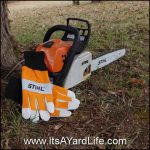